Do Gay Men Have More Sexual Interest in Children than Straight Men Do?

I thought about holding off on this post until the next time somebody in the news declares that gay men are to blame for the sexual abuse of children. I’d probably only have to wait a couple of weeks at most. But I’ve decided to go ahead and put this research notice out there, so that hopefully the next time this issue comes up, the rational folks talking about it have the data they need to back up their hunches.

So, at the outset, let me give away the answer to my headline question: Do gay men have more sexual interest in children than straight men do? No. And we have lab studies to prove it.

In fact, the British Journal of Psychiatry published a major study backing up the “no” answer almost 40 years ago. The distinguished sex researcher Kurt Freund and his colleagues used a laboratory method (described below) that demonstrated that the sexual responses of gay men to boys were similar to the responses of straight men to girls. (Both responses are relatively low.) This past June in Canada, at the major international research conference on sexual orientation science, sex researcher Ray Blanchard (who was trained under Freund) presented substantial new data confirming and expanding on Freund’s findings.

Blanchard has published this work online, making the work freely available to all comers. Click here to see the full paper. But, because this work is so important (the scientists assembled in Canada were stunned into near silence when they saw the impressive datasets and theoretical work Blanchard put before us), I asked Blanchard to explain the work somewhat more plainly for those who are not scientists. He’s been kind enough to do so for us here.

In other words, sex researchers studying these men strap a device over the subjects’ penises to measure how swollen or flaccid their penises become in response to various kinds of pictures and audiotapes. The idea is that, the more erect the penis, the more the man has been stimulated by the particular sexual material being presented to him. Blanchard further describes the subject population of his recent study:

Some laboratories doing phallometric tests use a “strain gauge,” which is just what it sounds like—a sensitive wire strapped around a penis to measure how swollen a subject’s penis gets in circumference in response to various stimuli presented to the subject. But Freund’s and Blanchard’s groups used a more precise type of measurement, a kind of bell jar that goes over the whole penis and allows the researchers to detect even small changes in penile volume. Blanchard explains:

“Penile responses were recorded as cubic centimeters (cc) of increase in penile blood volume from the time a stimulus trial started to the time it ended. (A stimulus trial was one audiotaped narrative plus slides.) A full erection, as measured by the equipment used to collect these data, would typically correspond to an increase in penile blood volume of 20–30 cc. However, most subjects responded much less than that.”

So what did the numbers in each category look like? First, keep in mind that this is not a random sample of the population walking around cities; this is a sample of men who were specifically referred for testing, typically because they were suspected of a crime or sought therapeutic help. Among that group, “the procedure of classifying subjects according to their highest penile response produced 1,066 heterosexual teleiophiles, 761 heterosexual hebephiles, 159 heterosexual pedophiles, 110 homosexual pedophiles, 86 homosexual hebephiles, and 96 homosexual teleiophiles.”

In order to repeat Freund’s comparisons for this post, Blanchard graphed the relevant information from the dataset as shown in the accompanying figure. He notes, “This figure shows the mean (average) response of each group to each stimulus category. So that statistically inclined readers can make some comparisons besides those I will explicitly discuss, I have included the 95% confidence interval for each mean. These are represented by the vertical lines bracketing the top of each bar. Two means are significantly different if their confidence intervals do not overlap. The converse, however, is not true, and the significance of the difference between means with overlapping confidence intervals must be tested with methods other than visual inspection.” 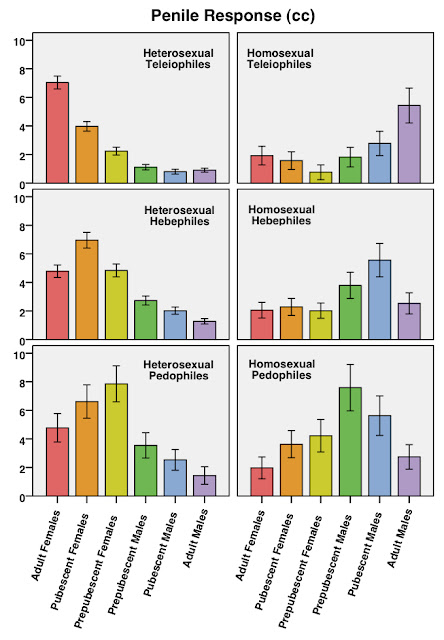 What does this pretty picture mean? Blanchard explains: “The key comparisons produced results similar to those of Freund et al. They show that gay men (homosexual teleiophiles) and straight men (heterosexual teleiophiles) have similar penile responses to depictions of children in the laboratory,” that is to say, relatively low—but more important than their being relatively low, they’re not really any different for gay and straight men.

Finally, “The middle panels and bottoms panels of the figure show that the stimuli depicting pubescent and prepubescent boys and girls worked as they should. The subjects who responded most to those stimulus categories responded as much or more, in absolute terms, as the subjects who responded most to adult men and women.” In other words, we have reason to believe that this testing method is giving us real data when we use it to conclude that gay men are no more likely to be sexually interested in children than straight men are.

One more thing Blanchard asks us to keep in mind: “Although the purpose of this analysis was to counter the notion that gay men present more of a risk to children than do straight men, it was not intended simultaneously to demonize all pedophiles and hebephiles. There are pedophiles and hebephiles who never act on their sexual attraction towards children. They cannot be blamed for what they feel, and they should be supported for the constant self-restraint they must exercise in order to behave ethically.”

Indeed, Blanchard’s work suggests to me that pedophilia and hebephilia look like sexual orientations—that, at least for men, sexual orientation is comprised not just of interest in a particular sex, but in a particular age range as well. That doesn’t mean, of course, that adult sexual interactions with prepubescent or pubescent children are morally permissible or should be legally permissible; Blanchard and I both feel that pedophiles and hebephiles have a duty not to act on their sexual urges, because children cannot meaningfully consent to sex with an adult. It is just to say that it makes no sense to persecute someone for an urge on which he does not act.
Posted by Alice Dreger at 11:32 AM