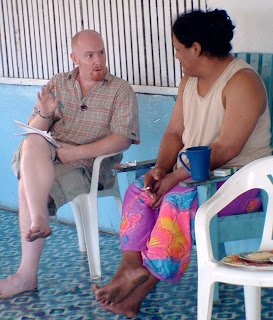 Ok, here goes: I'm going to see how many people I can offend by suggesting that maybe many little gay boys, like many little girls, are made up of sugar and spice and everything nice.

In North America, I suffer from a terrible disease. When the disease flares up, I am virtually incapacitated by the symptoms. But if I go to many other parts of the world-for example, most of Asia, I am miraculously cured. There's something in the North American environment that makes me sick, and that thing is largely absent in Asia. What is it?

Milk. It took me a long time to figure out that my body can't tolerate lactose, the sugar in milk, long enough that I also managed to develop an allergy to the milk protein casein. If I lived in a part of the world where milk was not part of the adult diet, I'd be fine. In fact, that's most of the world; scientists estimate that eighty percent of the world's adult human population is lactose intolerant. Thus, most of the world's cuisines skip milk. Frankly, from an evolutionary perspective, it's rather freaky to keep eating milk past the age of weaning. Y'all are freaks. I'm normal.

Except in North America, that is, where I live in constant fear of accidentally ingesting milk. I've learned the hard way that Americans sometimes hide milk in margarine, Cool Whip, baba ganoush, "vegan" muffins, Tums (Tums!), French fries, and, increasingly--tragically--beer.

Now, as my good friend Paul Vasey, the super sharp Canadian sex researcher, packs to head off for his annual research trip to Samoa, I have been thinking about how my milk problem is analogous to what Paul has been tracing in his work with regard to male androphilia. "Androphilia" refers to being sexually attracted to males. Paul uses the term "male androphilia" where other researchers talk about "male homosexuality" because Paul studies a special population of people in Samoa, the fa'afafine.

Fa'afafine are biological males who live "in the manner of women." Early in their lives, fa'afafine are recognized to be different from average males. They are more interested in the toys and games girls play, more inclined towards girls' chores, and just generally more comfortable in the cultural roles assigned to girls. Adults do not see these males as diseased or shameful, even while they recognize that these children will grow up (like straight girls) to be androphilic. They put these girlish males in the category of fa'afafine and so "normalize" them in the Samoan culture. These folks then go on to live "in the manner of women" (and not in the manner of men).

Paul Vasey of the University of Lethbridge in Alberta, along with his colleagues and students (most notably Nancy Bartlett and Doug VanderLaan) have been studying the fa'afafine in Samoa since 2003. Their findings have been fascinating; for example, the team has found evidence that the mothers of fa'fafine have more children, suggesting that male androphilia may persist because (theoreticallly) the genes that cause androphilia in some males also cause their female kin to be more fertile. Vasey's team has also found some evidence that male androphilia may persist in the genes of the Samoan population because the fa'afafine are exceedingly helpful and generous towards their nieces and nephews, thus (theoretically) improving the survivability (and ultimately, the reproduction) of these family members.

Great stuff, and I was delighted to pass on the Vasey team's articles on altruism to E.O. Wilson, who theorized about an "avuncular gay male" possibility decades ago. (I'd been in touch with Wilson regarding the book I'm writing about scientific controversies.) Wilson sent his compliments on to Paul. But what I'm interested in today is the paper that Doug, Nancy, Paul, and Laura Gothreau have coming out in the Journal of Gay and Lesbian Mental Health, because that's the work that's got me thinking about how being a gay boy is like having a physiological problems with milk.

In that paper, Vasey's team compares feminine boys in North America and fa'afafine. And what they find is fascinating: fa'afafine, like feminine boys in North America, show increased rates of wanting to stick close to their family. The Vasey team believes this behavior may have a "prosocial basis," meaning that it ultimately contributes to the wellbeing of their kin. Yet in North America, this tendency among similar boys often gets marked by psychologists as constituting a "separation anxiety disorder." But what if, as the Samoan data suggests, this is really a functional behavior that ultimately contributes to the family's well-being?

Indeed, in the forthcoming article, Vasey's group "argue[s] that elevated childhood separation anxiety is a developmental precursor of cognitive biases that evolved to facilitate increased kin-directed altruism in androphilic males."

In other words, sticking close to kin as children may just be part of the androphilic male's tendency to be especially helpful to kin. As the paper notes, in North America, many feminine boys get labeled as having "gender identity disorder" and "separation anxiety disorder" because they're not acting like average boys. But in Samoa, these feminine boys' interest in feminine things and their increased attentiveness to their close kin are not constructed as pathological. These are understood as normal behaviors for fa'afafine.

The Samoan solution is not to try to fix the gender-atypical kid; it's to just accept them as fa'afafine.
So by now you've figured out why this reminds me of my milk problem: both involve underlying biological states, but it's the cultural setting that determines whether suffering will occur. To further the analogy, the problem is not that I can't digest the sugar in milk; the problem is that my culture makes my environment full of that sugar. And the problem isn't that boys who will grow up to be androphilic are sweet; the problem is that, in North America, unlike in Samoa, we insist that boys be made of frogs and snails and puppy dogs' tails, and never of sugar and spice.

Many people in the U.S. and Canada think of North America as the epitome of gay liberation, but I get why Paul tells me that he feels much more comfortable, as an androphilic male, in Samoa than in North America. Part of the problem is that even many queer and queer-friendly people in North America deny that male androphiles are any different, on average, than male gynephiles (i.e., straight men), except in terms of their sexual preferences. They think that, in denying that androphilic boys and men are in various respects more feminine than gynephilic boys and men, they are being progressive.

But I don't think they are. First of all, denying facts is never progressive, and the evidence is unequivocal that androphilic males are, in certain respects, more feminine on average than gynephilic males. But more importantly, it seems a lot more progressive to accept androphlic males as they are (i.e., act Samoan) than to insist that they fit the heterosexual model of gender (i.e., act North American).

Now I just wish Paul would follow the study that he and Nancy did of Canadian fag hags that was published in Body Image, a study that showed that gay men (like Paul) make their fag hags (me) feel better about themselves. Because he has not been telling me often enough how great my hair looks.
Posted by Alice Dreger at 8:32 AM